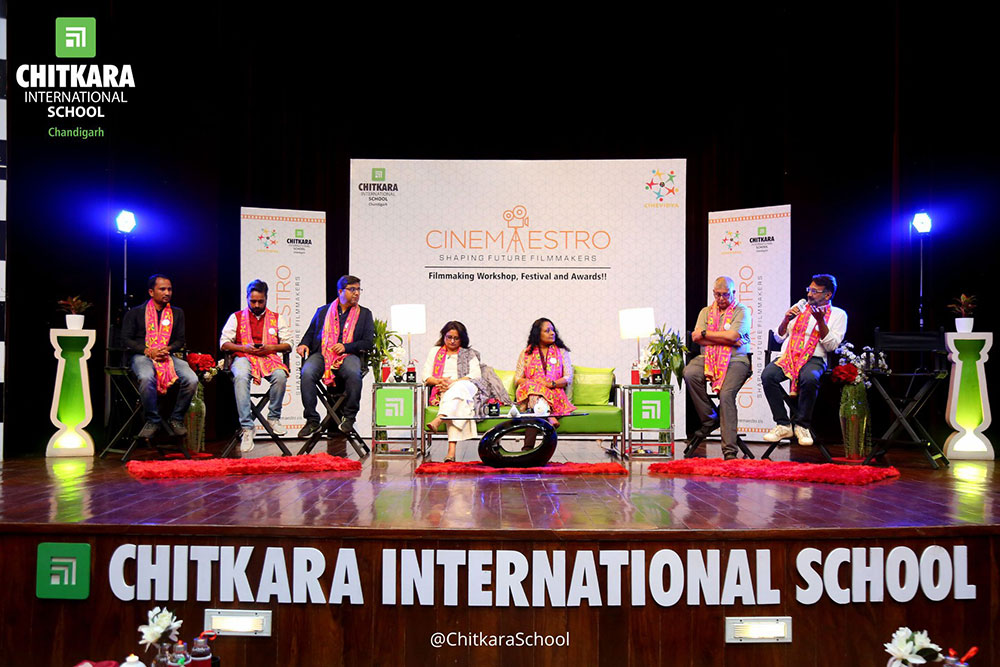 CineMaestro is a mega inter-school filmmaking workshop and film festival aimed to motivate and unleash students’ filmmaking skills and creativity via “Cinevidya – a path-breaking Social Enterprise”. The said was commenced by Mr Amitabha Singh, a dynamic cinematographer and producer in the Indian film industry known for many famous films. Mr Singh’s trailblazing idea of having a platform to find filmmaking geniuses and to boost the production of children’s cinema in our country led to the conception of Cinevidya. Under this initiative, country-wide Filmmaking Workshops and Festivals are organised so that more and more children receive hands-on training in Filmmaking using the latest technology and equipment. Under CineMaestro, every year Chitkara International School organises a series of workshops. Hence, being one of the school’s attempts to render boulevards of excellence for the students that lead to skill enhancement and knowledge attainment. Starting in 2019, it has been a total of “3 takes” extravaganza. This year a 3-day venture of “CineMastro: Shaping Future Filmmakers-Take 4” for brilliant students was organised by the school. The said workshops were held on the 1st, 2nd and 3rd of November 2022 and were broadly divided into 4 Modules viz Screenwriting, Screen Acting, Choreography and Cinematography. Notable dignitaries, Mr Supavitra Babul (Film Director and Writer), Ms Aarti B Bhasin (Producer and Director), Mr Ambar Chakravarty (Director at Addict Studios, India and Filmmaker), Ms Jayaprabha Menon (Choreographer), Ms Radhika Menon (Choreographer), Mr Hiroo Keswani (Cinematographer), Mr Pushkar Singh Bisht (Cinematographer) and Mr Palok Singh (Cinematographer) graced the occasion and made sure that each student partaking in the workshops is fully involved and given equal attention. These workshops helped students to enhance their skills. Hence, enthralling and riveting activities communed for the different modules on all the 3 days. 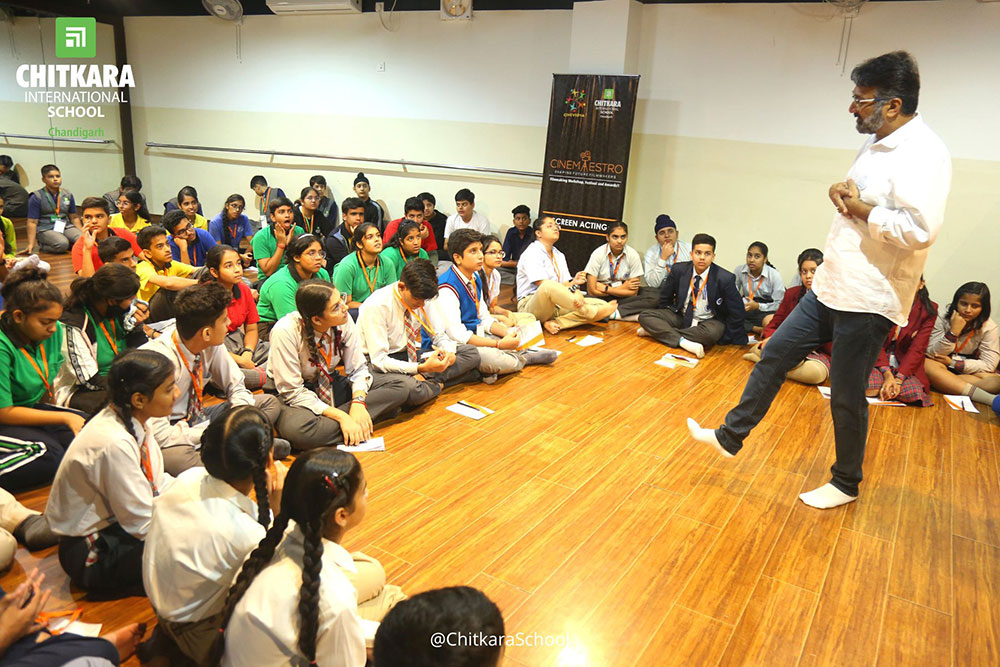 With much zeal and enthusiasm, Chitkara International School (CIS) commenced the fourth edition of the school’s one-of-its-kind interschool filmmaking competition, “CineMaestro – Shaping Future Filmmakers”, with the budding filmmakers and incredible filming aficionados. The event kick-started with a riveting “Get-to-Know-You” session, where the resource persons and experts from the film industry shared their thought-provoking take on their work, life, challenges, and success, also shedding light on their amazing journeys. Importantly, the young learners from some of the most renowned schools of Tricity partook in the different filmmaking workshops viz. Cinematography, Choreography, Screen Acting, and Screenwriting, with the aforementioned filming maestros helping them enhance their knowledge of their interested fields. From learning the niceties of creating the ‘right look’ of a film shot, the basics and tools of screen acting, and the essence of Indian classical dance with the incorporation of seasons and elements of nature to uninhibitedly exploring what makes writing for screen shine. The learners indeed had an excellent start to an astounding and creative journey that lay ahead. 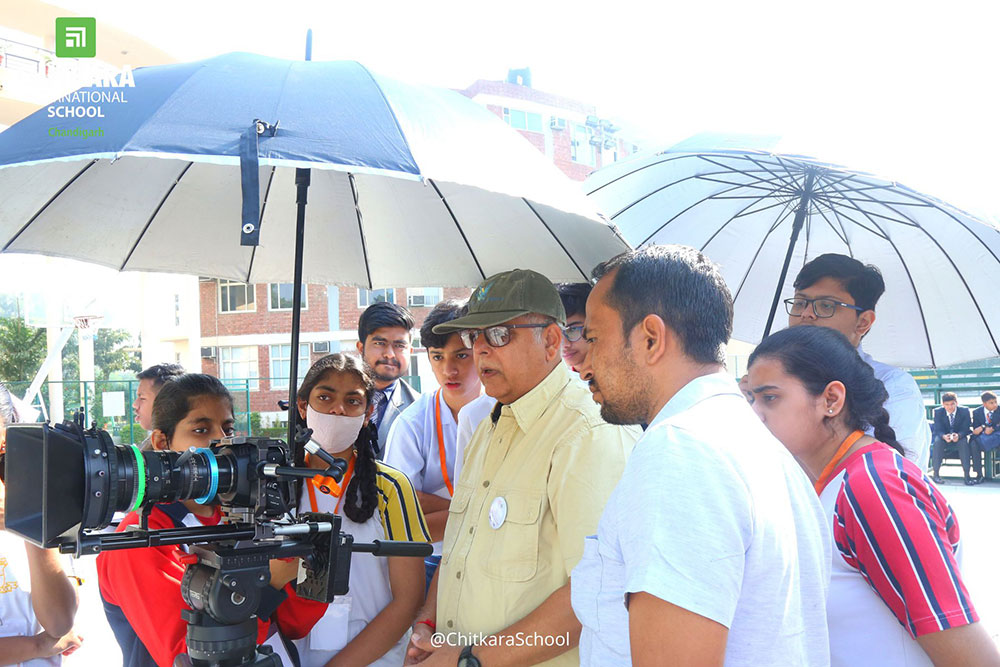 Assimilating the essentials of filmmaking processes viz. screenwriting, acting, cinematography and choreography with their incredible gurus, the young learners of the Tricity engaged enthusiastically in fun-filled module-related activities, also witnessing fascinating demonstrations of the processes by their phenomenal mentors. The enthralling day familiarised the students with concepts like character types, kinds of sounds, and colour coding of emotions (Screen Acting), witnessed them engage in dance performances depicting the supremely divine mudras of Lord Nataraja (Choreography), let them comprehend the first, second, and third acts of a story and the process of creation of a genre-based story (Screenwriting) and engaged them in understanding the shooting process by creating scenes for an engrossing theme-based short film (Cinematography). Indeed, Day 2 proved to be highly rewarding for the learners and encouraged them to look at filmmaking with a wider and fresher perspective! 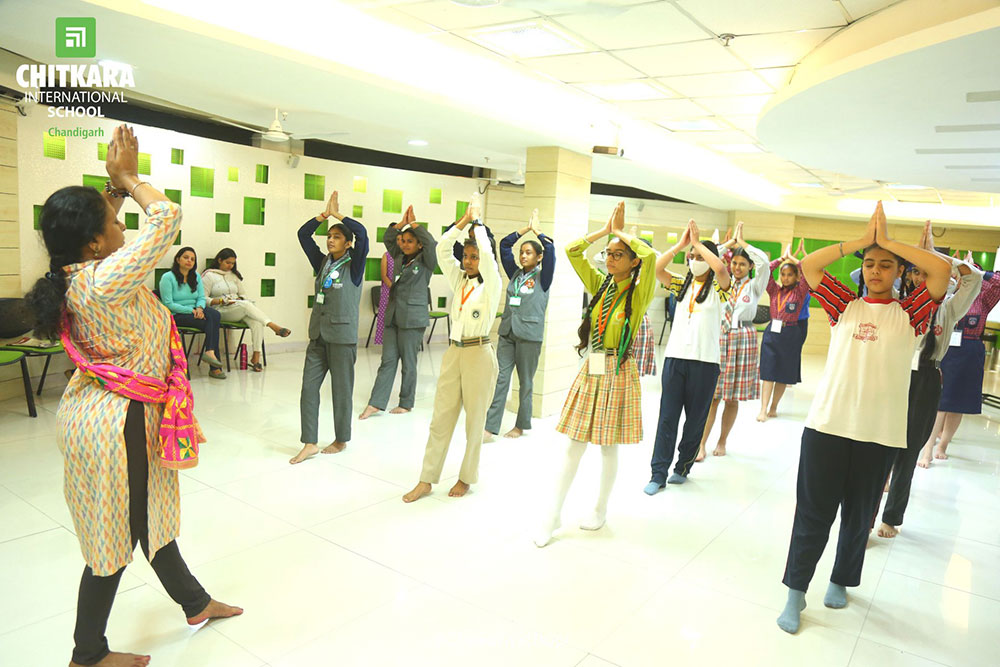 Day 3 of the filmmaking workshop under CineMaestro witnessed highly zealous and avid participation from the dynamic youth as they continued to explore the various fields of filmmaking and understand the dynamics of the field, alongside their much accomplished and venerable mentors. From emoting with confidence and acting in a group, chanting shlokas on dance art and representing exemplary choreography, shooting a theme-based short film and finding the right angles to writing a compelling story and acting it out, the budding filmmakers engaged enthusiastically in enhancing their knowledge. Furthermore, rendering the magnificent event a perfect conclusion, the students from each filmmaking module exhibited their learning through riveting performances and were further acknowledged for their outstanding participation and attentiveness during the delivery of the modules through unfeigned applauses and the much-awaited “Star Performer” awards. Overall, the 3-day workshop under CineMaestro concluded on a merry note of anticipation, as the participants moved on, with learning and confidence, towards creating their own short films for the final selection and mega screening at CineMaestro Film Festival!
Valedictory note 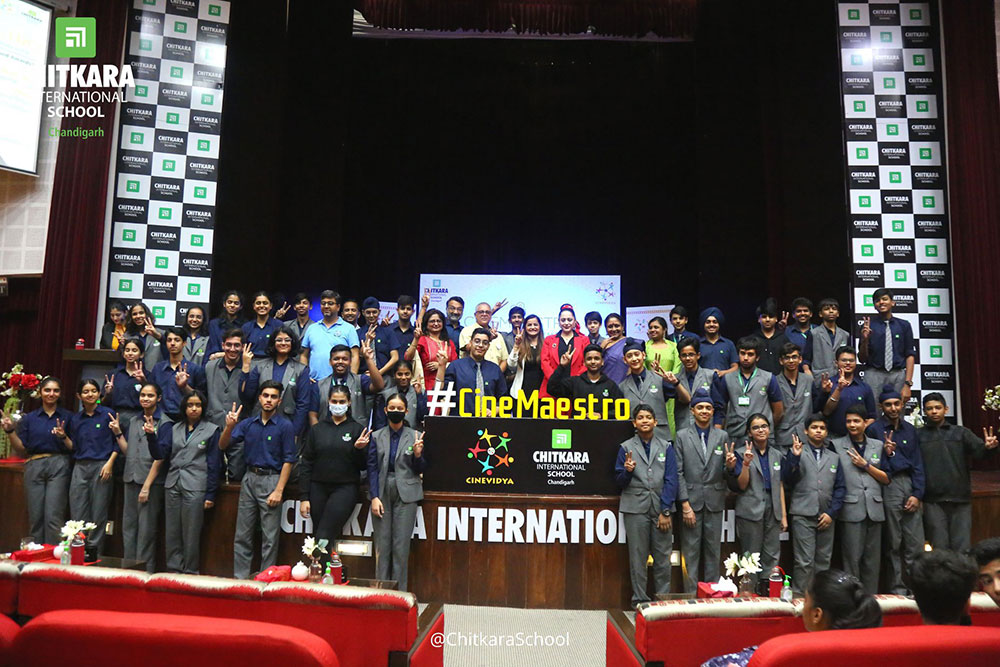 CineMaestro, at Chitkara International School, is a mega event held to give recognition to the filmmaking skills of the endearing students and to encourage them to hone their talents in this newly emerging field and flourish in times to come. Furthermore, after rigorous hands-on training in the workshops using the latest technology and equipment, the school now awaits the short films to be screened on the date of the “Film Festival”, amid which the pre-eminent of the lot will be awarded. This will be done through an illuminating filmmaking competition. In the filmmaking competition, students will test their learning and bring everything that they had learnt during the workshops to work. They will create short films and submit them. After the submission of the short films, all the short films from participatory schools will be screened in the school auditorium at Chitkara International School. The celebrity guests then will announce the results during the Award Ceremony of CineMaestro. In the said ceremony, along with the best film, students will also be awarded for their individual efforts; for best actor, best film editing, best screenwriting, and best cinematography.